The importance and love of family is apparent throughout Justin van Breda and his husband Alastair Matchett’s house in the Southern Cotswolds. In the sitting room, a portrait of Alastair’s mother hangs above the fireplace; a George III table in the bay window once belonged to Justin’s father. The furniture in the main bedroom once sat in the home of Alastair’s grandmother; and the chairs at the end of a bed in another room belonged to his mother.

A focused dose of family history can be found in the downstairs cloakroom, where the walls are hung with black and white photos of Justin and Alastair’s parents and grandparents. There’s also a framed British flag that Alastair waved at the Queen’s Silver Jubilee in 1977. Even their yellow labradors are part of the story. Margot had her eight puppies in the cloakroom, and they lived in there for three months,’ says Justin. ‘Maudie, one of her puppies, is named after my grandmother.’ And so, quite apart from the history of the house itself, there is a sense of layers, and of a narrative.

With such careful custodianship of their own heritage, it is unsurprising that the couple have been sensitive towards work done on the house, which Alastair has owned since 2000. In the hallway, among a host of paintings, hang the original parchment title deeds, dated 1636, and further title deeds can be found upstairs. In renovating the house, nothing was dramatically changed. ‘A scullery was added on behind the kitchen, and the laundry used to be the carriage house,’ says Justin, ‘We still have the original carriage- a Georgian trap – it’s in the garage.’

The kitchen is Justin’s favourite room: ‘We have every meal in here.’ When Alastair bought the property, the kitchen was elsewhere in the house. He created the new one out of six small utility rooms, including a coal store. A huge wooden cider press, original to the property, dated 1814, stands in a corner of the room, and the dresser, with the original paintwork is also original to the house. The scalloped shelving detail has been carried through to other rooms. 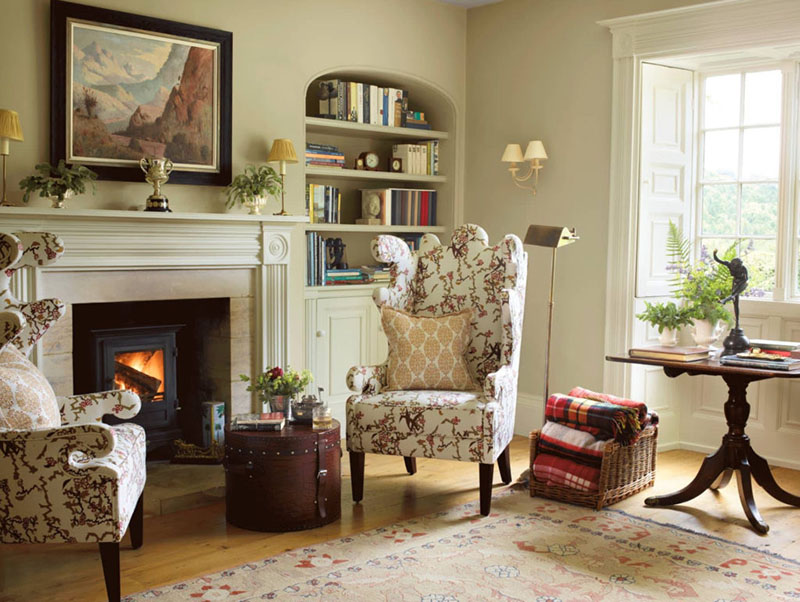 The Augustus armchair in Trailing Hawthorne, from The English Fabric Collection

The sitting room has all its original features, including the fireplace, doors, windows and floors. Along with the family objects and Alastair’s collection of bronzes, are two pieces of furniture that Justin has designed – the Augustus wingback chair, sitting in the corner between the windows, and the Blythe sofa. ‘The Georgians did a lot of crazy shapes, I went even crazier!’ he says to explain their flamboyant forms. Both are upholstered in textiles from his first fabric collection – ‘Pavilion Plasterwork’ for the sofa and ‘Trailing Hawthorne’ for the chair.

It’s in the dining room, however, that Justin’s design input is particularly apparent – not only are the table and sideboard from his collection, the room is papered in a print he devised. ‘I adore Constable’s Wivenhoe Park 1815 painting, so had it specially printed for here. I plotted the canvas, and manipulated it so that the mansion house was in the centre to work across the three walls.’ Alastair wasn’t so keen on the idea of wallpaper, but made a concession for this room. He loves it now as the scenic room feels as though you are dining in the park. 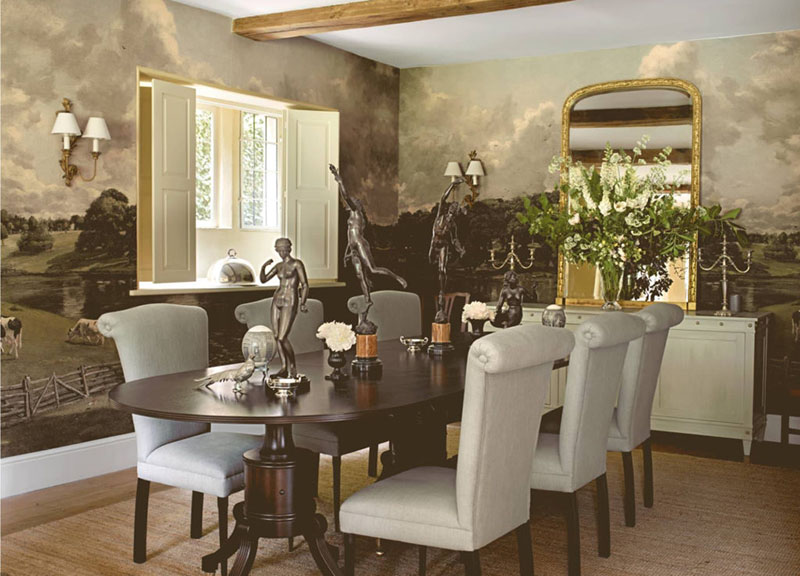 The dining room at Watercombe, featuring our George dining table

Altogether there are seven bedrooms in the house, including the main one, which was once a series of tack rooms. The others are styled to some degree – one is the Victorian room, another is the Chinese. Justin’s favourite bedroom is the Africa room, which contains all his favourite things from South Africa, which is where he grew up.

As a child he had a yellow and white bedroom: ‘It was the first colour choice I made,’ he says. ‘I remember moving my room around and pushing the bed up to the window and pulling the curtains over it to make a tent.’

After studying English and politics at university, and design at art college in Cape Town, he took a gap year in London, having just enough money not to work for a month. ‘I was very precocious and wrote to a whole lot of designers,’ he says. Justin happened to approach Nicholas Haslam at exactly the right moment. ‘He had just landed a huge job in Belgium, and knew it would be useful to have someone who could speak Flemish, which is so similar to Afrikaans.’

Justin’s ‘first real big job’ with Nicholas Haslam was to work on a pop star’s house. ‘It was a baptism of fire, managing the curtain makers, specialist painters, tailors and furniture restorers,’ he says. ‘I spent three weeks down there completing the installation. At the end of that year Nicky then offered me the job of creative director – I was 25 years old!’

After three years, Justin decided to branch out on his own and opened a shop on Pimlico Road in 2002. The following year he launched his first furniture collection winning Decorex International’s Future’s of Design award, and since then the line has expanded to include bespoke and customisable pieces. At the time of writing, he is represented by eight showrooms in the United States. ‘My furniture takes references from design history focussing on proportion, line and finish,’ he says. ‘What’s also fascinating to me is the different regional aesthetics - that what they buy in New York is not what they buy in Atlanta or London.’

In 2015, Justin launched his first fabric collection, and has opened a space, The Fabric Room, adjacent to his furniture studio, where he sells his own textiles as well as those of a number of other designers, including two from South Africa.

He and Alastair live in London during the week, and go to the house in the Cotswolds for the weekends. Even in the garden, their strong sense of family is apparent. A mound, which used to be a Georgian ice house, is covered in daffodil bulbs. ‘When Alastair’s mum died, we planted 1000 daffodils there,’ says Justin. The couple’s fathers both died within a short time of each other, and a friend gave them a pair of oak trees in their memory.

What Justin loves most about the house, he says, ‘is that nothing’s too precious, it’s just a working house’. The couple are always thinking of doing more things to it, however. They have plans to build a Bannerman-esque neo-classical rough-hewn timber folly, using tree trunks as columns. ‘We’ll install a fireplace in there and watch the last rays of sunshine in the evenings.’

The full article is in the book alongside a host of other fascinating designers, and it is available here. 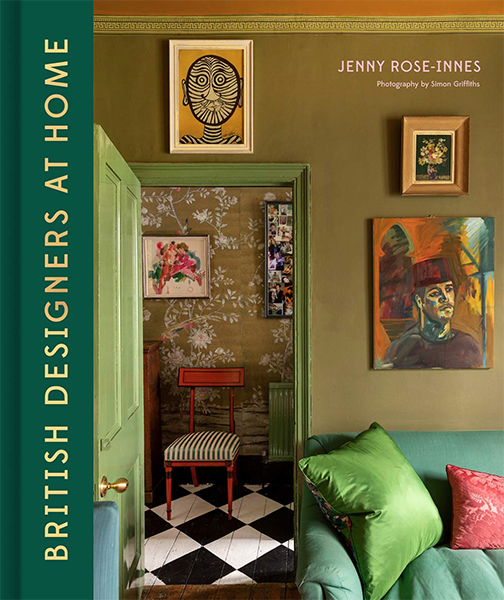